Two Washington state frat boys in the late 1970s proved that persistence and an entrepreneurial spirit can pay off big time. In fact they proved that you can win big by failing. If they hadn’t started a failing trucking business after graduating, they wouldn’t have had the assets in place to make millions of dollars selling Nintendo arcade games across the country.

Before we meet Al Stone and Ron Judy, here’s a little back story:

The Richest Man in Japan

This Japanese businessman named Hiroshi Yamauchi was one bad– well let’s just say he was one what-it-said-on Samuel L. Jackson’s character’s wallet in Pulp Fiction. Yeah he was one of those to the core.

This no-nonsense head honcho was Nintendo’s third and longest-serving president in the esteemed global video game giant’s history. He was a ruthless businessman and had a keen eye for what kind of games the public would want to play most. He was president of Nintendo for longer than Fidel Castro was dictator over Cuba, or Muammar Gaddafi ruled over Libya, and he presided with the same iron-fisted rule.

During that time he oversaw Nintendo’s ascendancy from the 1940s when they were still making board games until the Nintendo Entertainment System came out, and into the 21st century. In 2008 he was the wealthiest man in Japan.

Well if you’ll remember, when Hiroshi decided to try to break into the lucrative United States gaming market in the late 1970s, Japan had still very recently been literally nuclear bombed by the Yankees. Twice. Not to mention its every other city was firebombed back into the Stone Age, then came the Korean War, and after that Vietnam. So for this Japanese company to try to penetrate the foreign and culturally very different Western U.S. market for arcade games– it was a big risk and a bold move.

He started gaining traction and moving Nintendo video game arcade cabinets through a good network with a trading company that would export the cabinets to U.S. distributors, who would turn around and sell them to U.S. vendors. The profits weren’t great, but the system was there to make enormous profits, Hiroshi thought, if they could cut out the middle men and start a U.S. based division of Nintendo to grow the business. 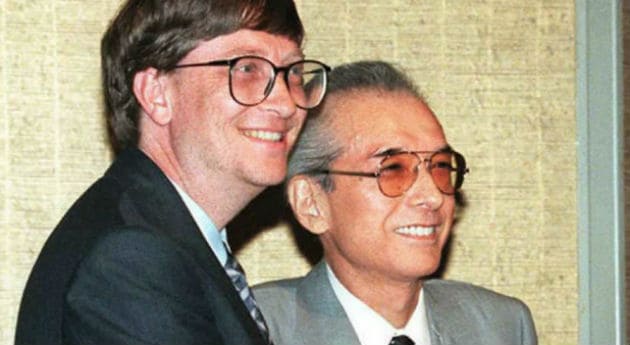 He was under no illusions that the undertaking would be anything but risky, difficult, and fraught with challenges. He turned to a 34 year old Japanese man named Minoru Arakawa, a literal genius and MIT graduate. Minoru was living in the United States and had a deep love for America, which he had traveled cross country in a Volkswagen bus after graduating college.

Here’s the kicker: Minoru happened to be married to Hiroshi’s daughter, Yoko, and she did not like what Nintendo had done to her father’s personality one bit. She believed running the business had taken over his life and made him cold, and was worried that the business would claim her husband too. Well after Hiroshi proposed the idea to Minoru at the beginning of the year 1980, over the protests of his wife, who went as far as to say no matter what he accomplished he would always be seen as just the son-in-law, Minoru decided the opportunity was too good to pass on, and started Nintendo of America, a wholly-independent subsidiary of Nintendo.

Minoru and his wife began to learn the fledgling video game arcade business inside and out, spending their evenings in local arcades watching the players trade their coins and play the games. When they were ready to begin operations, Minoru set up a meeting with a couple frat boys who he thought might make the perfect salesmen for Nintendo’s cabinets: Al Stone and Ron Judy. 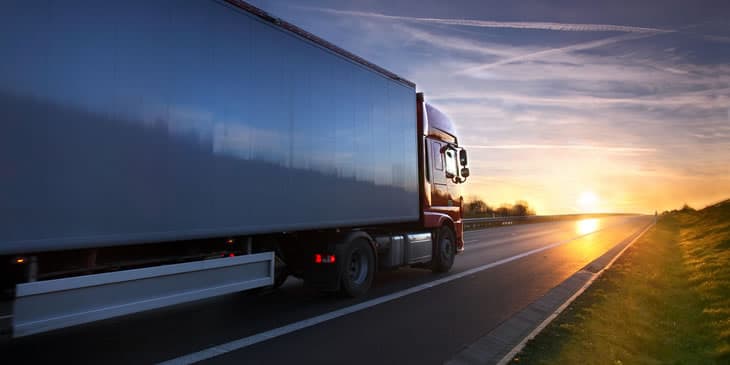 Al Stone and Ron Judy were a couple old buddies and partners in crime who attended college at the University of Washington. They lived in the same frat house together and were notorious on campus for working together on various business ventures with the goal of striking it rich. They would buy local wine that was about to expire and be discarded on the cheap, then resell it at a profit to other college students and frat boys who wouldn’t know the difference or care.

After graduating college the pair started a trucking business based in Seattle called Chase Express. The business struggled and they continued investing money in it and burning through cash as they hoped for a turn around, but they could see the writing on the wall and were looking around for another business opportunity. As it turned out, the time and money spent on Chase Express did not go to waste. The experience they had gained in operating big rig trucks would serve them well when one of Ron’s friends in Hawaii informed him that a Japanese exporter was looking for a distributor to sell some arcade games made by Nintendo.

The partners agreed and had a crate shipped to them containing several arcade cabinets of Nintendo’s Space Fever game. The video game was a total rip-off of Taito’s Space Invaders, but Space Invaders was a popular game, and Ron’s brother-in-law agreed to put the arcade games in some of the taverns he own in south Seattle. The Nintendo machines were absolute magnets for quarters, which was all Al and Ron needed to realize with dollar signs in their eyes that they might have stumbled upon their big business.

From the ashes (and truck assets) of Chase Express they created a sales and distribution company named Far East Video. They would travel around the country selling Nintendo cabinets to bars, arcades, hotels, and pizza places. They started to make a lot of money. But something was about to happen that would make them both millionaires off of a single arcade game title and indelibly stamp their names into video game history.

In a short amount of time Al and Ron’s success started to dry up. Nintendo’s follow up games to Space Fever were uninspired. Space Launcher was a dud. Space Firebird was a disaster. Nintendo tried some non-space video games and all of those failed too. Al and Ron were ready to quit their new business, not knowing that right around the corner would be the greatest boon of their lives. Nintendo needed to hit a home-run badly or fade into obscurity. And it was about to hit one.

Minoru had his big hit planned: Radarscope. It was another space combat game, but this one had cutting edge, innovative 3-D graphics. It was getting positive reactions in test locations around Seattle as well, so Minoru spent what was left of NOA’s resources to order three thousand cabinets. A few weeks later just before the shipments would arrive, Minoru visited the test locations and was startled to see that nobody was playing the game. It was eye catching at first, but had no replay value to gamers.

So a last ditch effort was made to keep kicking and stay alive. Minoru quickly hatched a plan to get a designer in Japan to create a completely different game and then swap out the Radarscope motherboards for the new game and repaint the arcade cabinets. To do this Nintendo bet everything on Shigeru Miyamoto, a floppy-haired hippy artist and a total rookie game designer. Shigeru was passionate. He believed videogames were an art form on the same level as books, films, and popular television shows.

Nintendo was on the verge of finalizing a deal with the owners of the Popeye cartoon franchise to license Popeye the Sailor Man for an arcade game. Shigeru set to work designing a video game around these beloved characters, one in which Popeye had to climb up obstacles and jump over barrels thrown by his archnemesis, Bluto, to save his girlfriend Olive Oyl. The game play was incredibly brilliant, innovative, and fun. The only problem was, as the shipments for the game started to arrive, the deal with King Features for Popeye fell through.

This plunged the entire crew, Hiroshi, Minoru, Al, and Ron into total chaos. It had been one setback after another. They had no idea what to expect next. Miyamoto hurriedly rewrote and redesigned his video game’s characters, keeping all the same elements of the game play. When the new chips arrived, the American crew installed one into one of the Radarscope machines and saw the words “Donkey Kong” display on the arcade screen. 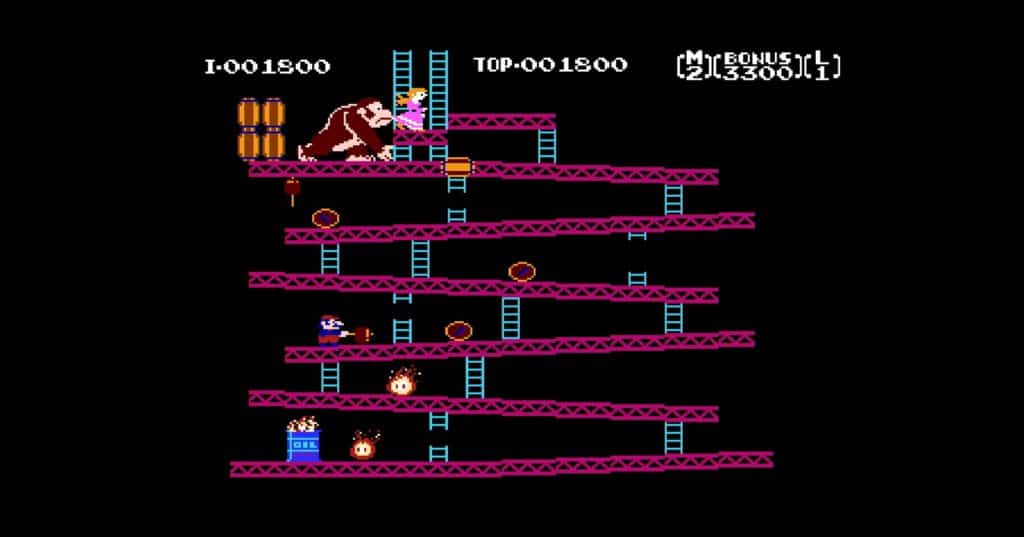 The game involved a tiny red plumber rescuing a fairy tale princess from a gorilla hurling barrels at him. They were devastated. It seemed like a silly, bizarre game with a silly, bizarre name. So much for Nintendo’s badly needed home run. Yet out of options and out of time, Al and Ron started traveling the country to sell the new, untested video game, by the new, untested game designer.

It became a national sensation.

It was a bigger hit than they had even hoped for. By 1982 Donkey Kong had sold 60,000 units in the United States. At $3000 per cabinet, and working on a steep commission, the title made Al and Ron both millionaires. Enriched and emboldened by their good fortune, Nintendo of North America started making plans for its next big hit with Al Stone as its new vice president. As it turned out, the hero of Donkey Kong, then named “Jumpman,” the first video game character to ever jump, which blew gamers away in 1982, would soon become the most iconic video game character in history: Super Mario.