At the very beginning of 2014 I needed some money. Actually I needed a lot of money. I had recently walked away from my promising career as a political news writer and taken some time off to raise my newborn son. My wife and I lived off our savings during that time and a little money we could make here or there doing odd jobs for businesses online. We also ran up some debt on some credit cards. To pay for Christmas that year, I got out several old U.S. gold and silver coins I’d been saving for a few years and sold them at the going rate, a percent or two over spot.

I decided to go into high volume, high dollar retail sales at a very professional, multi-million dollar legacy operation that had been selling in my city since almost World War II. The mentors I found there changed my life forever. These guys and gals were the absolute cream of the crop. Extremely high performing, sharp as a tack, energetic as hell, seasoned salespeople, professional negotiators, and business people of the highest acumen. 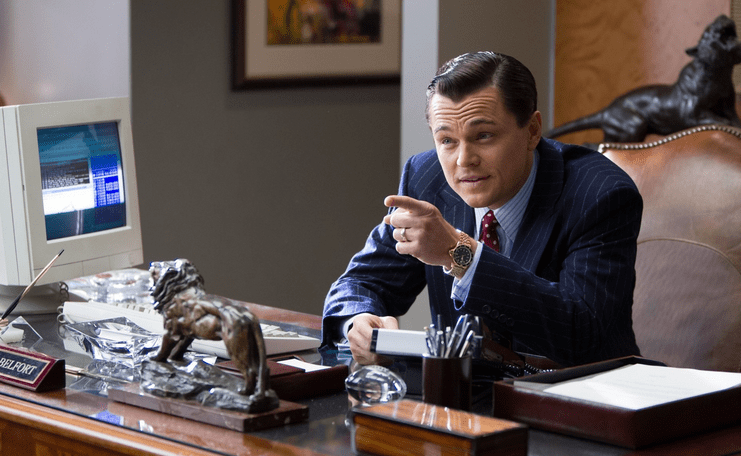 It was an exciting time to go into sales because Hollywood had just released Martin Scorsese’s much-anticipated offering, The Wolf of Wall Street, starring Leonardo DiCaprio in the true, if dramatized, story of Jordan Belfort, a man who made hundreds of millions of dollars teaching college drop outs and random misfits with a lot of spirit the art of selling massive volumes of penny stocks to amateur investors in the most challenging of all possible sales situations: a cold phone call, and to close their sales on the very first call.

Watching the movie amped me and the rest of the sales force up. When I met these characters, and a lot of them were real characters, The Wolf of Wall Street was all they could talk about. Everyone kept shoving a pen in my face and saying, “Here, sell me this pen!” I immediately got myself a copy of the real Jordan Belfort’s sales seminar series, teaching his sales method: Straight Line Persuasion. Like I said, watching the movie amped me up. Watching the sales seminar by the real man himself made me deadly. It sharpened me into a real, professional salesman almost overnight.

A native of the Bronx, Jordan Belfort is an absolutely straight to the point, no-nonsense, no-bullshit kind of guy. His every word and mannerism emanates confidence and success. A lot of seminars that purport to teach you valuable skills can be full of fluff. I can feel my eyes glaze over and my time being wasted when I watch garbage like that and I tune out pretty quick. Jordan speaks with all the urgency of a person whose time is worth a pretty penny and who made his living teaching people to close big sales over cold phone calls, and there is not a drop of fat on his presentation. It’s all meat. Choice cut. 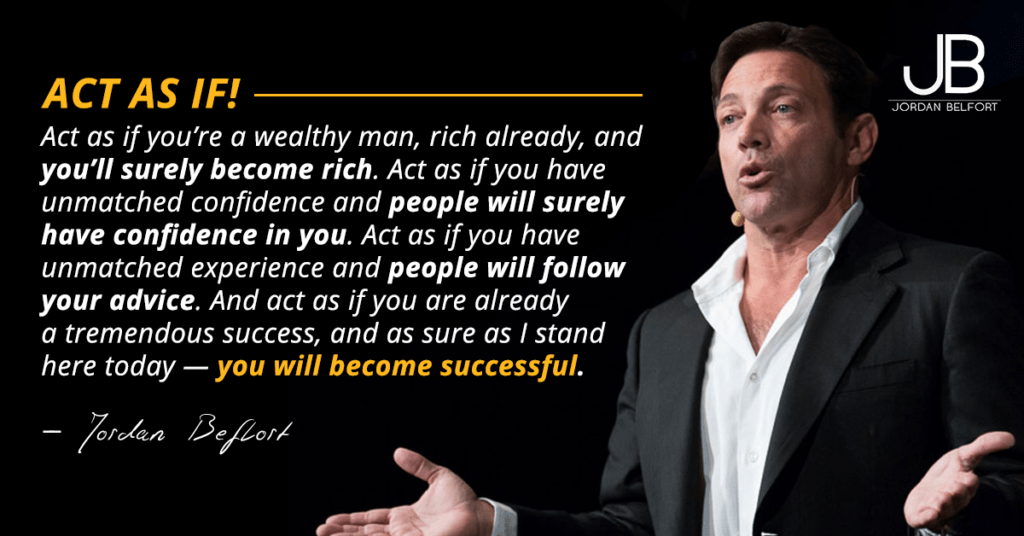 Jordan Belfort’s mother wanted him to be very financially successful in life, so knowing that dentists had very lucrative businesses providing their services, as Jordan grew up, she continually whispered into his ear that he would grow up to be a dentist.

That was false start #1.

Jordan had to reorient himself the world and make a new plan for financial success. He became a door-to-door meat and seafood salesman in Long Island, New York. His business was a success at first. He grew the meat-selling business until he had several employees and says one time his business sold 5,000 pounds of beef and fish in one week. But he eventually went out of business and had to file for bankruptcy at 25.

That was false start #2.

According to his memoirs and interviews, it was at that time that a family friend helped Jordan find a job as a trainee stockbroker at L.F. Rothschild. As depicted in the movie, The Wolf of Wall Street, he wasn’t working there long before the Black Monday stock market crash shook the financial world to its foundations on October 19, 1987. The firm experience massive layoffs and Jordan was out.

That was false start #3.

By 1989, Jordan put together his skills and founded Stratton Oakmont, and by the time the company closed down in 1996, it had made three billion dollars– that is billion with three commas ($3,000,000,000) in early nineties dollars– in revenue selling penny stocks and at its height, the company had over 1,000 stock brokers and managed over a $1 billion worth of U.S. stock, including handling the IPO (initial public offering) of Steve Madden shoes. 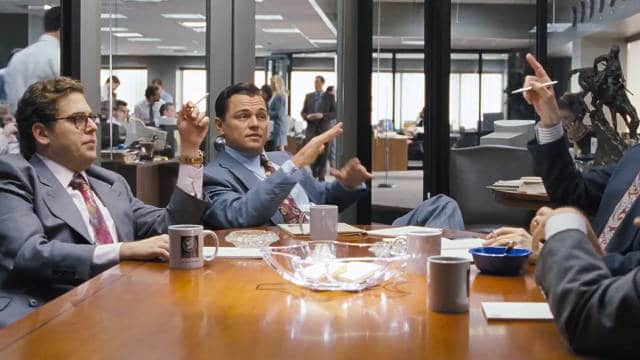 “The only thing standing between you and your goal is the bullshit story you keep telling yourself as to why you can’t achieve it.” -Jordan Belfort

It’s not just you and your happiness that’s at stake in the world. Although that should be enough. What you do with your life has a cosmic impact. It affects everyone around you. Every little misdeed, compromise, retreat, failure to be excellent tilts the entire world just slightly towards oblivion, and every time you do the right thing, stand for what you believe, triumph, and rise to excellence, you tile the entire world slightly towards perfection. There are only 7 billion people on this planet. The average person knows 1,000 people. Each of them knows 1,000 people. And each of them. So you are only three degrees separated from a billion people in this world. Your success has a massive ripple effect. It is your responsibility to be the best possible version of yourself and to pursuit your happiness with fierce aggression, focus, and sharpness of mind.

“When you live your life by poor standards, you inflict damage on everyone who crosses your path, especially those you love.” -Jordan Belfort

The first step is to take your destiny into your own hands.

“Successful people are 100% convinced that they are masters of their own destiny , they’re not creatures of circumstance, they create circumstance, if the circumstances around them suck they change them.” -Jordan Belfort

Jordan Belfort knows what it’s like to fail along the way. If you’re failing, good! You’re trying. Keep persisting. Fail more. Fail until you succeed:

“If you want to be rich, never give up. People tend to give up. If you have persistence, you will come out ahead of most people. More importantly, you will learn. When you do something, you might fail. But that’s not because you’re a failure. It’s because you have not learnt enough. Do it differently each time. One day, you will do it right. Failure is your friend.” -Jordan Belfort

You are not your past. You are the future you are working to create:

There is no success without action:

“Without action, the best intentions in the world are nothing more than that: intentions.” -Jordan Belfort

Burn your ships and kill your horses. If you’re at a point of rock bottom in your life, good! Now you have no choice but to rocket into the sky from the ashes of your defeats:

When problems are solved money changes hands. What problem do people have that they will pay to have solved for them that you have a burning passion to solve? The world stands on its head for people who reach the height of their potential in leaning into a problem that people want solved.

“The easiest way to make money is -create something of such value that everybody wants and go out and give and create value, the money comes automatically.” -Jordan Belfort

If you’re not rich. If you weren’t raised by people who are rich. But you want to be rich. You have to change who you are completely to get there. You have to become a different person. There’s an easy way to do it. READ. Fill your mind with the thoughts and mindsets of people who have succeeded in life, made their stamp upon the world, and been richly rewarded for it. The world’s wealthy and successful don’t make any secret about it. They are telling us what they did.

The greatest shortage in the world is of people who are willing to bend their minds in the same direction as the most successful and put their heads down and go to work creating a better world out of the richness of their money consciousness. That’s why they are rewarded so highly for it.

Subscribe to this website and what you read each day from some of humanity’s greatest luminaries will program your mind to be rich.

By the way. A word of warning. If you do become rich, The Wolf of Wall Street is a two part movie. Part one depicted Belfort’s massive success. Part two depicted everything he built completely falling apart under the weight of vices and deficiencies in his personality that he had not sorted out yet. If you want to build something that lasts you will have to sort yourself out along the way.

Must Read
40 Troublemakers Share Their Stories Of Being Banned For Life
MonicaApril 28, 2022
- Advertisement -
Advertisement