Fans of the Japanese manga will certainly appreciate this sculpture very much. This massive statue, soberly named “Surge” stands on Széchenyi Square in Budapest, Hungary.

It should also remind parents a little of those Saturday and Sunday mornings when their dear toddlers have decided to interrupt their sleep-in.

This perfect optical illusion is called “Decrease and Ascend” and was sculpted by Australian David McCracken. It is an infinite staircase.

The illusion gives the impression that the staircase goes on and on.

These “Vicissitudes” are the work of Jason de Caires Taylor, an underwater sculpture specialist and can be found on the island of Grenada in the Caribbean. This sculpture has a strong message to convey. We observe people in a circle turning their backs and holding hands.

It is in fact the African slaves who died during the boat trip from Africa to the Americas who are pictured here.

23. Aww … Someone Found A Dance Partner

What makes kids so adorable is that they can do things a little bit crazy and still look so cute. 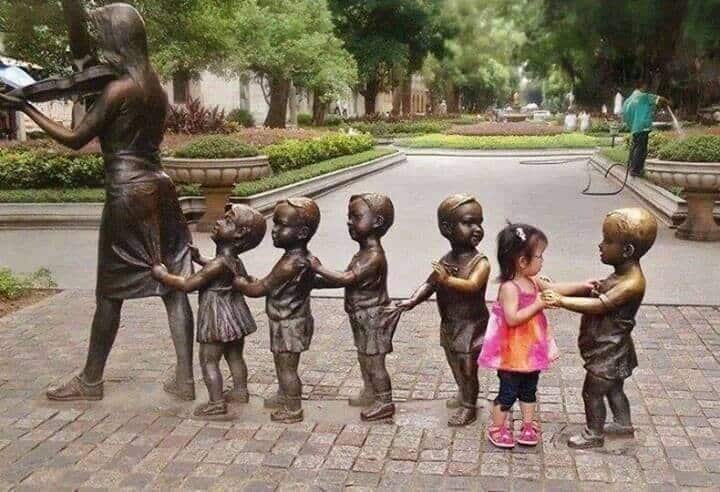 This little angel is unwittingly totally adorable by wanting to do a dance step with this statue.

In a lot of places in the world, farmers still sow their seeds in the traditional way and it looks a bit like that. 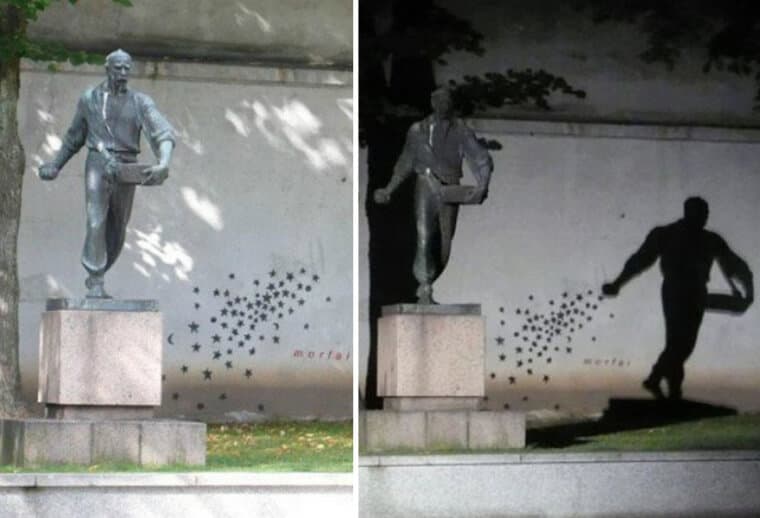 This sculpture which plays with shadows and uses street art, is called “The Sower” and can be found in Kaunas, Lithuania. Apparently, the town hall had the wall repainted, considering the street art with the stars as vandalism.

25. A Sculpture That Makes You Think

This sinking library is housed in the Melbourne Library, Australia and considered one of the city’s must-see landmarks. 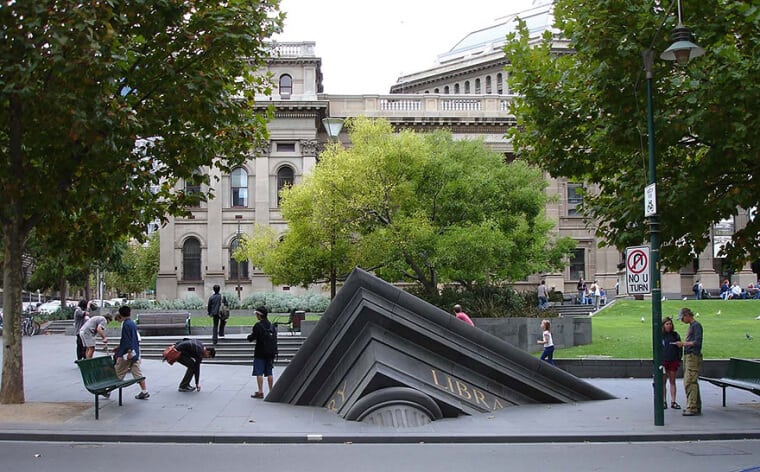 It symbolizes the disappearance of paper books and this important cultural place where ideas are exchanged in the face of the rise of these new technologies on which we are totally dependent. It’s sad in a way.

26. A Statue Not So Friendly

This epic and massive statue of the God of War in China weighs over 1,300 tons. She’s a little scary.

We love it even if the boat passing in front spoils the picture a bit in our eyes. He has the merit of giving us a scale to give us an idea of ​​the size of the statue.

27. Fortunately They Are Not True

These hippo sculptures are very cool and are a joy to all children, but luckily they are just statues.

You may not know it, but hippos are very dangerous animals due to their aggressive and unpredictable nature.

28. There Is Worse As A Challenge And As A Pose

Who Said Museums Are Boring? People who don’t like museums can take inspiration from the good humor of these two young women. 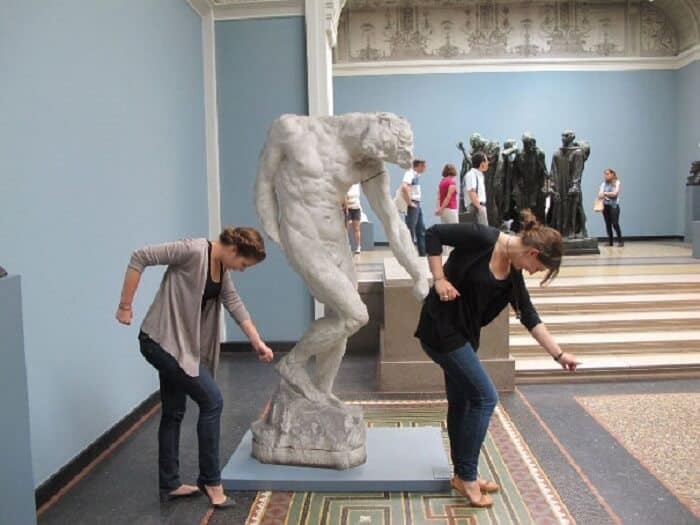 They know how to take a fun photo that will go viral on the internet. After all, she’s so much better than so many selfies and other challenge photos on the net that usually go viral.

This sculpture is the work of Bruno Catalano and is entitled “Les Voyageurs”. We find her in Marseille and she is quite simply visionary.

This bronze statue is eye-catching and depicts a worker with missing parts of the body. A similar sculpture can be found in Halifax, Canada, of this migrant arriving in a new country.

This giant underwater statue represents a young girl who seems to carry the weight of the oceans on her shoulders, much like Atlas carried that of the earth.

If you are worried about the environment seeing all these underwater statues, know that they were designed with a ph neutral cement that does not pollute and helps the coral to attach firmly to it. This statue therefore enlarges the coral reef.

31. A Sculpture Speaks More Than A Thousand Words.

It is the monument of “Anonymous Passers-by” in Wroclaw, Poland. This statue symbolizes all the souls who have been lost, imprisoned or injured by the totalitarian communist regime that ruled Poland for many years. 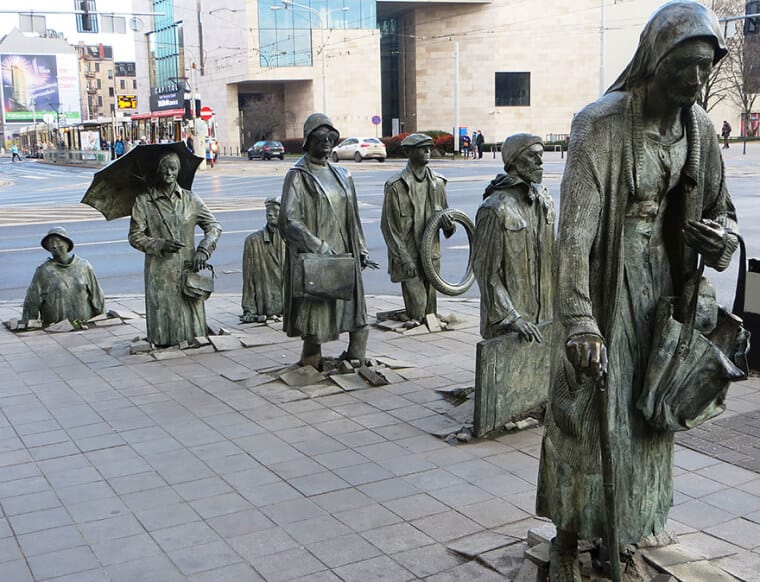 This monument is in Wroclaw to honor those anonymous people who revolted against communism in this city in 1981 and were severely punished by the government.

Police officers are often seen in movies chasing after runaway crooks. This one often ends up escaping. 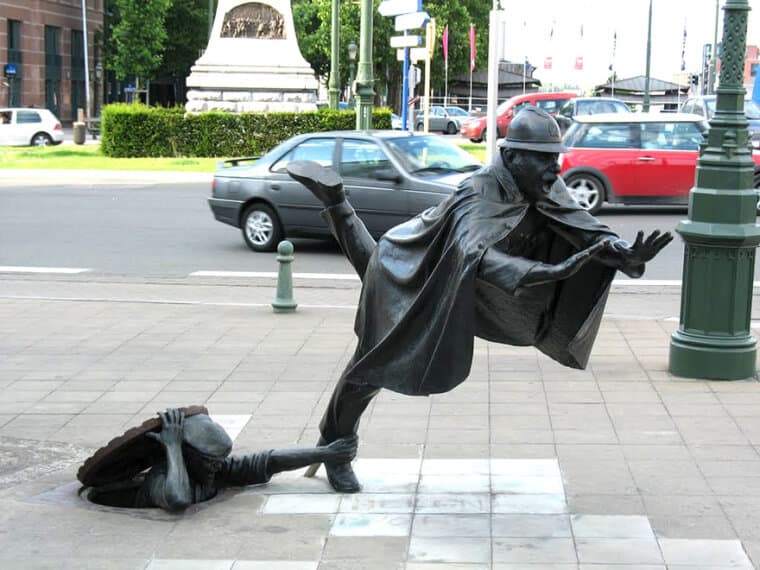 This sculpture is called “The Vaartkapoen”. It is found in Brussels, Belgium. It seems that this rascal is trying to help his friend escape by tripping this policeman.

“People Of The River” in Singapore is considered one of the most creative statues in the world. We really have the impression that these children are throwing themselves into this river.

Artist Chang Fah Cheong explained, “My involvement in creative activities, especially sculpture, is a state of mind. It is awareness, an acute awareness of my existence, made up of variables and possibilities. unlimited. “

This sculpture of Nelson Mandela in his native land pays homage to a courageous, good and valiant man.

This Mandela sculpture by artist Marco Cianfanelli is on display near Howick, KwaZulu-Natal, South Africa. This is the place where Nelson Mandela was taken prisoner by the police and where his long march to freedom began.

Shapeshifters are creatures that can change shape. This beautiful hair is not that wonders which represents the equestrian world. They are Kelpies. Mythical shapeshifting creatures that take on the appearance of horses so that their victims straddle them and that they can dive into a deep lake to drown them. 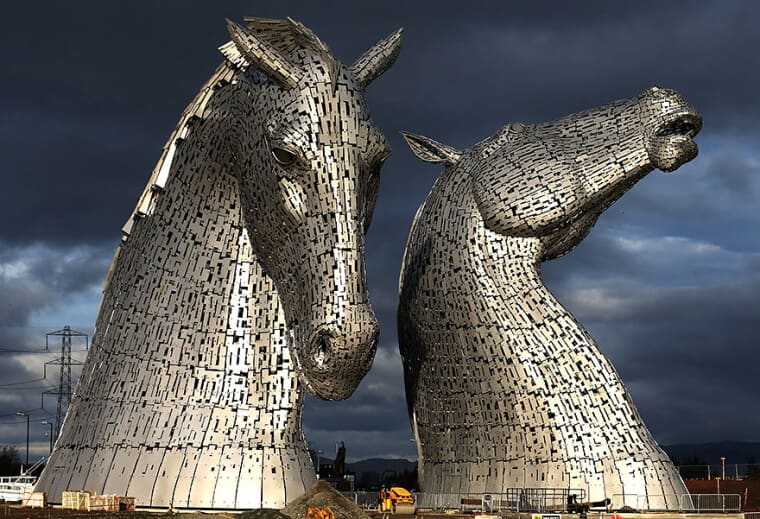 These statues of Kelpies are 30 meters high and each of the two heads weighs over 300 meters. Sculptor Andy Scott created these amazing sculptures which were completed in 2013.

It feels like it’s Elmer’s rifle when Elmer decides to try to hunt Bugs Bunny and the latter always ends up knotting his gun. It also reminds us a bit of Hagrid in Harry Potter and the Sorcerer’s Stone .

This statue is in fact a denunciation of violence and guns. There are 16 copies all over the world.

This rather funny sculpture of a salmon comes to us from Portland, Oregon. The work on the brick looks a bit too crisp and clean for the desired effect, don’t you think. 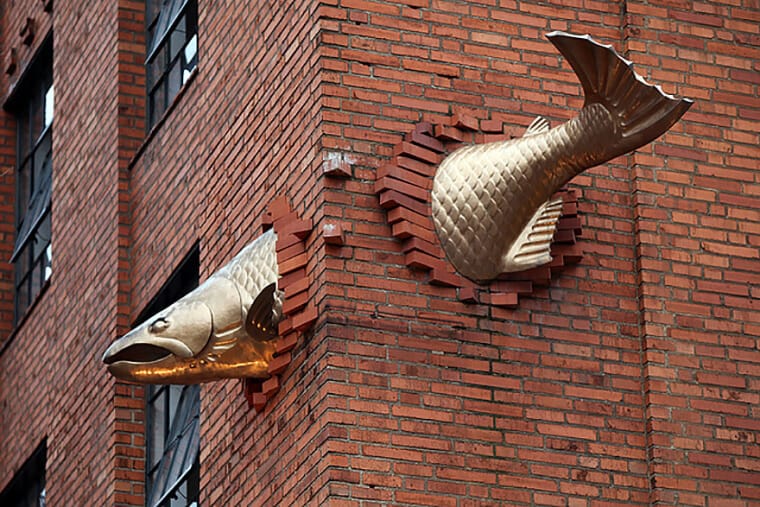 After all, flying fish do exist, and salmon are known for their spectacular leaps. From there to ending up on a building, we don’t really know.

38. In A Parallel Universe

These “Jaume Plensa” sculptures can be found in a park dedicated to this art in Yorkshire and show us how humans should protect trees and nature.

It is not, but there is hope. We can be optimistic when we see the artists and the young generation committing themselves to the environment in this way.

This amazing and original sculpture can be found in Prague, the capital of the Czech Republic, depicts a famous man holding his arm above the void. It was created by the Czech sculptor David Černý. 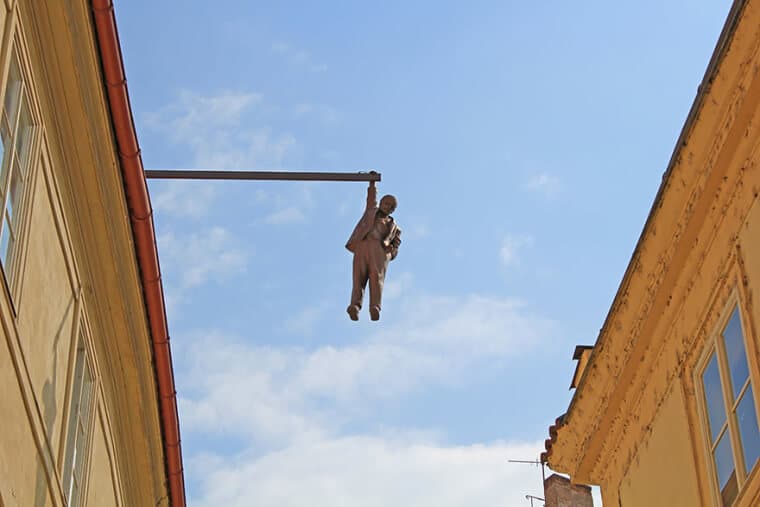 There is no doubt that more than one passer-by wanted to shout “Don’t Jump” or call for help as they passed by this statue. Did you recognize the man in question? He is the famous inventor of psychoanalysis Sigmund Freud. 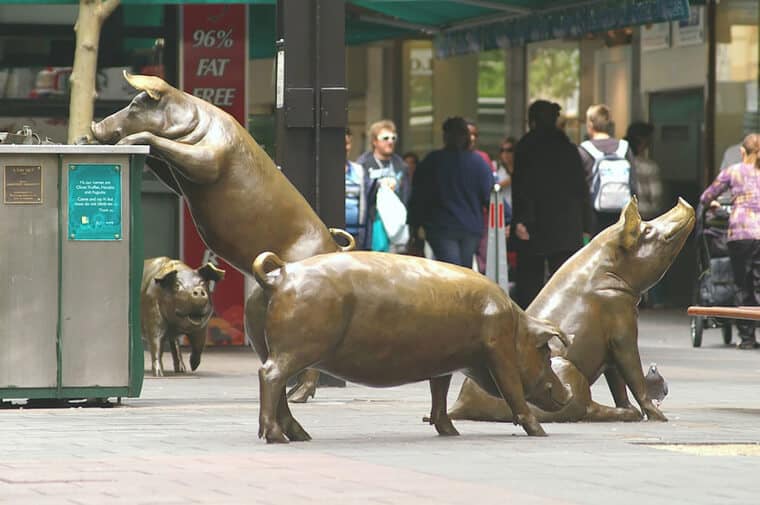 The sculptor titled it “Day Off” and it is located in Adelaide, Australia. Children must love this artwork and its adorable pigs.

41. The Four Horsemen Of The Apocalypse

“La Montée Des Eaux” is a work by Jason DeCaires Taylor. It can be found in the Thames in the City of London a short walk from the British Parliament.

We find the sculptor Jason DeCaires Taylor who plunges these four horsemen, like the four horsemen of the apocalypse, in the rivers as a warning to climate change and rising waters.

“The Herd On The Move” is located in Dallas, Texas, USA. This sculpture is so realistic. We have the impression that the herd will start moving again in the next second. Hats off to the sculptor! 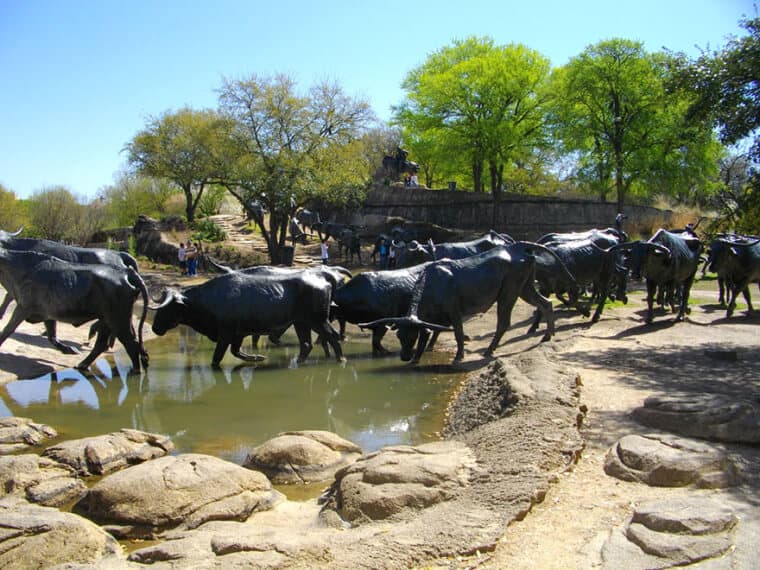 If you take a closer look, you’ll be impressed by the sculptor’s attention to detail. A gripping work that leaves you speechless!

We don’t know what you think about it, but there is something like a je ne sais quoi in these statues that invite spirituality and reflection.

As if the artist’s work was not enough, the weather had decided that day to give even more character and to make the work even more captivating.

44. The Sharknado Movie Is Based On Real Facts

Sharknado is a B-movie that has many fans, despite its implausible storyline. Giant tornadoes form over the Pacific Ocean, sending an army of sharks into the air that terrorizes the population on dry land. A film to be taken completely in the second degree. 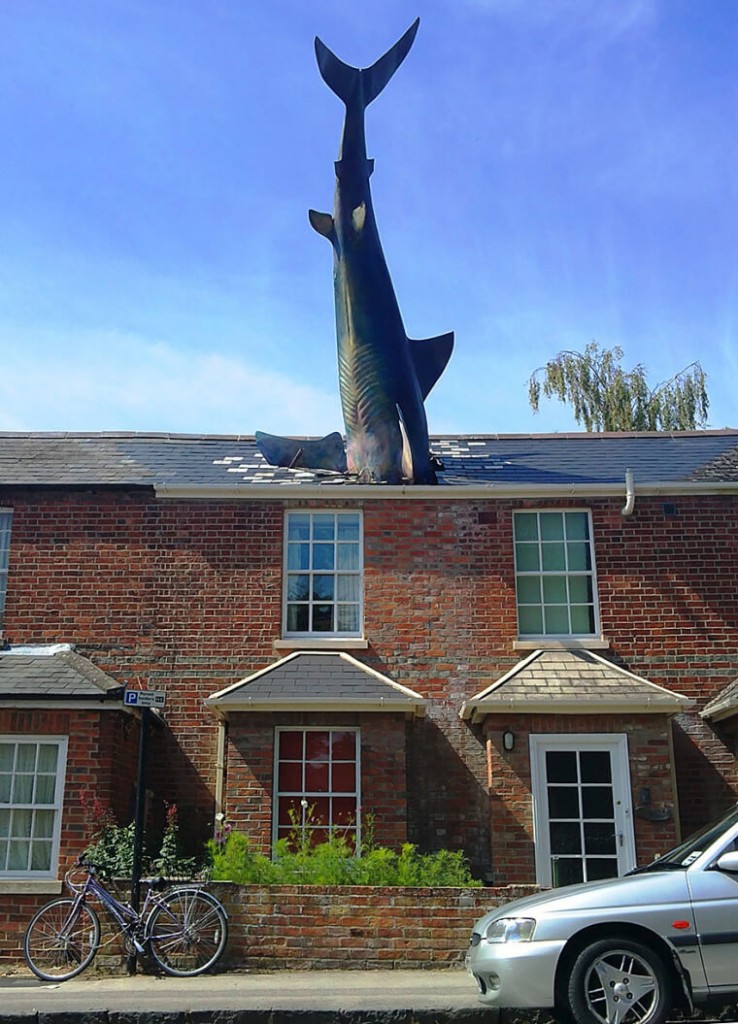 Apparently, it really happened, if this sculpture is to be believed. It seems that the city of Oxford, UK is the home of one of the film’s big fans.

Blockhead in English means fool, silly, but literally it just means stone blockhead. Perhaps the sculptor had fun with the English expression and decided to represent it literally.

This statue is actually called “The Unknown Bureaucrat” and was created by Icelandic sculptor Magnus Thomasson in 1994.

At first glance, you might think you’re watching a villain from one of the sci-fi movies around. In fact, it is a wonderful sculpture.

It is called “Metalmorphosis” a play on words in English on the words metal and metamorphosis. This work by David Cherny can be found in Charlotte, North Carolina, USA in Whitehall Technology Park.

47. One More Reason To Hate War

It is a scene from World War I that can be found in the town of Eceabat in Turkey. 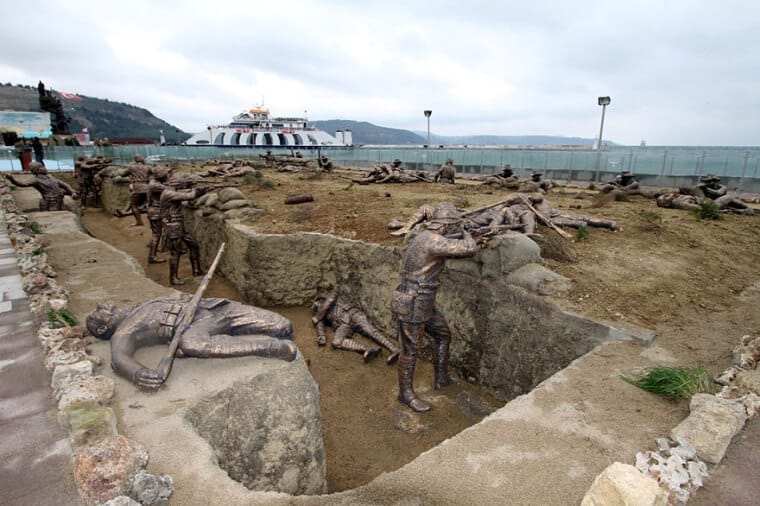 This battle scene represents every aspect of this war on the battlefield, including death.

48. They should be moved at night

These iguanas look so real, but we have a suggestion. They should hire someone to move them after dark. The iguana park in Amsterdam would thus be transformed ad infinitum. 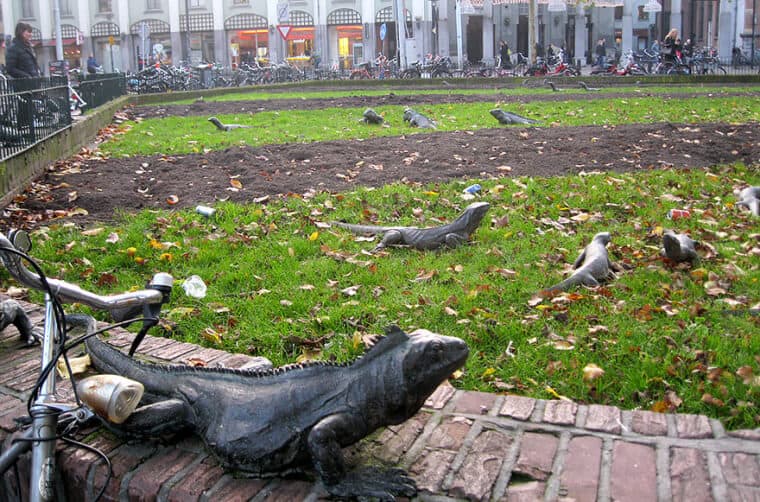 If you want to see them for real, there is a park with roaming iguanas in Guayaquil, Ecuador. It’s a great visit.

49. Can’t wait for the weekend

This sculpture in Bratislava, Slovakia is called “Man At Work”. It represents a man at work who seems strangely smiling. How can you be so smiling at work? 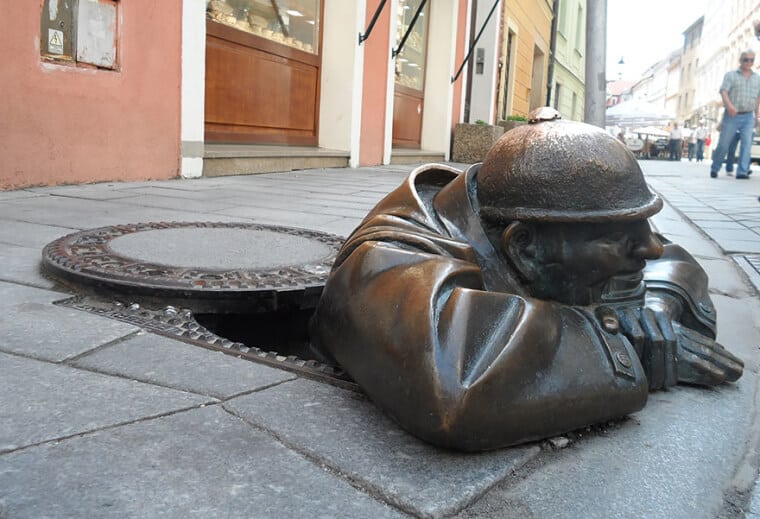 It’s probably Friday and he’s thinking about what he’s going to be able to do this weekend.

50. Time To Leave This Planet

This spider sculpture is on display at Tate Modern in London and is very spooky. It will give people who hate spiders a cold sweat.

It reminds us a bit of the Stranger Things series and Stephen King’s new Brume / em>. If you haven’t seen the series or read the short story, we highly recommend them.